The Maugean Skate, Zaeraja maugeana, also known as the Port Davey Skate, is a chondrychtyan elasmobranch discovered in 1988 by Professor Graham Edgar during a preliminary biological and hydrological survey of the region (Last et al., 2007). Even it is still observed in Macquarie Harbour, it has not been seen in Barthust Harbour since this first survey. However, several studies improved the knowledge of this endemic species. Last et al. (2007) then speak of “relic species”, meaning that despite its current restrictive distribution, this species should have its original deistribution range far wider, notably during previous geologic epoch as the Gondwana was formed as result of continental drift. This asumption was based on the fact that only two other marine species in the genus Zaeraja are known. They are issued from an ancient group Dipturus-like skates, and are found now in New-Zealand for Z. nasatus, and in South America for the Z. chilensis (Treloar et al., 2017). Nowadays, we estimate the population size between 1000 and 3000 individuals, which makes it possibly the smallest of any chondrichthyan species (Bell et al., 2016; Last et al., 2007; Last et al., 2016; Treloar et al., 2017). Because of its restricted population size, and its narrow geographic range, the Maugean skate was assessed for the International Union for Conservation of Nature (IUCN) Red List of Threatened Species as “Endangered” (Last et al., 2016).

As the Maugean skate has not been observed any where but in Macquarie Harbour, information about the habitat must be treated carefully. This environment see their parameters influencing each other. Hence, the observation of the Muagean skate a specific depth can be due as the salinity or as the temperature or the dissolved oxygen level, but not specialy because of the pressure.

Recent surveys indicate Maugean skates live in shallow brackish water, spending most of their time between 6 m to 12 m of depth, where salinity is low (18 ‰ to 27 ‰) and temperature has limited variability (12 °C to 15 °C). Nevertheless, Maugean skate show an ability to cross water deeper than 20 m for the purpose to reach different shallower areas. These skates have shown a nychtemeral pattern, spending day time in deeper water than night time, when they are also more active. Although site fidelity behaviour is observed in this species, the DO seems to be limiting, with a preference above 30 % of saturation (Bell et al., 2016; Last et al., 2007; Treloar et al., 2017).

As all the skate, Maugean skate is a cartilaginous fish dorsoventrally flattened, with five ventral gill slits and the mouth on the underside of the body, and eyes and spiracles located on the upper side of the body (Figure 1). Its pectoral fins are greatly enlarged and allow the locomotion by undulation, but they are not clearly demarcated from the body (Aidan, 2003). Its pelvic fins are strongly forked, while its tail is depressed and moderately broad at its base. The tow dorsal fins of the Maugean skate are slightly more upright for the first one than the second. It is to note the presence of nuchal, orbital, tail, malar and alar thorns on this species. Tail thorns are particularly well developed than the others, with three regular rows on the males, and five on the females, whereas pectoral fin is mostly naked in males, but scattered minute were present in largest female (Figure 2). The snout is slender and pointed. This morphology is a possible feeding adaptation: it is found on bottom dweller species in silty habitats. The upper and the lower jaws are composed of one longitudinal row of unicuspid teeth (Figure 3). The back part is mainly dark greyish brown, but rostral cartilage is strongly demarcated from white area adjacent. Ventral surface is paler, with variable markings, included irregular whitish and brownish areas (Last et al., 2007). 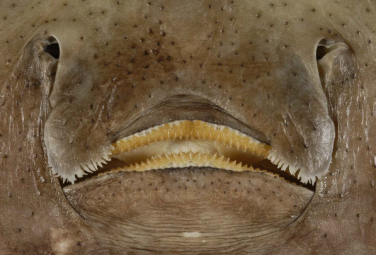 The oldest Maugean skate observed was 11 years old, but it could reach 15 years old and maybe pass over (Bell et al., 2016). Female could reach 840 mm total length (TL) and male are smaller, around 660 to 700 mm TL for the mature ones (Last et al., 2007). Globally, half of the extracted males seems to be mature at 632 mm TL, and 662 mm TL for the females. This oviparous animal have not a special breeding period, but reproduction seems diminish in summer though (Bell et al., 2016).

According to their morphology, Maugean skates are adapted to the benthic environment. Their long snout demonstrates a feeding adaptation as a bottom dweller and they appear to be highly specialised for their epibenthic feeding mode. Stomach content and stable isotope analyses have shown that this relatively high trophic position species (3,68 δ15N) primarily eats crustaceans; mainly the red-spotted shore crab (Paragrapsus gaimardii) and Caridean and Mysid shrimps, although the sand crab (Ovalipes australiensis) and Haswell’s shore crab (Helograpsus haswellianus) were also found, as well as smaller invertebrates (i.e. polychaetes) and teleosts in smaller amounts (Bell et al., 2016; Treloar et al., 2017; Weltz, 2017) (see Key prey species). It is important to note an ontogenetic dietary shift, with polychaetes forming 25 % of the diet of immature animals whereas they make up almost 0 % of the adults’ diet (Weltz, 2017). Both stomach contents and stable isotope analyses found no aquaculture feed.